Posted on November 16, 2015 by rebeccarunesson

A few days ago I did something outside my comfort zone: I led a Bible study on Ephesians 5 in a Christian student association. Those who know me well enough will note that almost every word in the preceding sentence is like a little gust of wind propelling me farther and farther from my safe little zone of convenience and comfort. First, I’m one of those individuals that people avidly fear inviting to Bible Study groups – that annoying girl who just can’t stop herself from pointing out that “there’s like a -10% chance that Pilate’s wife’s dream was a historical event rather than a theological point” or the eternal reminder to “choose silence over harmonization”. Second, I’m a Gospel Girl through and through; the letters have always been more of a Sunday event for me than an everyday occurrence. Third, I’ve never really been part of a Christian association: when I go out (as in exit my own little bubble) I like to kill two birds with one stone and learn something new at the same time, so I’m often drawn to events and associations catered to people who are different from me in some way, or are part of a group I don’t know that much about (like my brief stints with the Muslim Student Association and Community Garden Club at my Highschool or my faithful attendance to the various lecture series hosted by Hamilton’s Jewish Association). The result of this is that I sometimes find myself in possession of more knowledge about other traditions and faiths (and gardening techniques) than my own. Perhaps this is one of the reasons I’ve become more and more drawn to various Christian settings since I started university (make no mistake though: the restless nature of my relationship with associations perseveres: I think I visited every Christian denomination in Uppsala before I finally set foot in a Church of my own tradition).

But enough of this introspection, let’s get down to the good stuff: what did I learn? Answer: our attitude to the Bible can either unite or divide us. To explain: I was determined to lead the Bible study on Eph 5 because I was keen that 5:21-33 (on the “Christian family”, as its labeled, faultily, in most Bibles) should be given the space for theological and exegetical reflection it deserves (and I was obsessed with the text for a good two months last semester, so I felt that I could cater to this aim). What’s most fascinating about this text is how much it changes when put under the scrutiny of a rhetorical analysis. If read quickly, one would categorize it as the first section of a “family theme” stretching into chapter 6, but the more I read the text from the perspective of literary analysis, the more I felt that it should rather be seen as the conclusion – the summa summarum – of chapter 5. Permit me to expand the explanation: 5:1-5 can be epitethed “Imitatio” (it explains that we should imitate God), 5:6-14 can be renamed “Beware the Emptiness” (since it explains how empty words lead to actions of darkness, revealed only by the light of Christ), 5:15-20 can be re-labelled “Lonely Planet: Guide to Christ” (since it’s like a guide of how we should live once Christ’s light has shown us the difference between good and evil deeds). This leads (as is demonstrated below) to the not-so-un-controversial christening of 5:21-33 to “Christ gets cozy with his ἐκκλησία”, instead of the frankly more triste “Man Heads, Purifies, and Dies For Subservient, Respectful Wife”. How do I have the chutzpah to suggest such a name shift? Have I brought some show-and-tell artifacts with me to back up my gutsy claims? Indeed I have. Exhibit A: 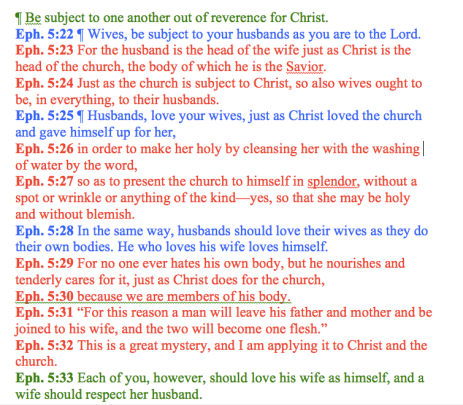 Before I delve into this colourful little affair I have to come clean about something. The idea for this colour-coated interpretative key was derived from a lovely little article I read on 1 Cor 7:17-24 (comment below if you want a link to the PDF), in which the scholar categorized the different types of statements Paul makes, in order to ascertain what the main message – or the universal, theologically normative statement – of the passage was. I dubbed this delightful method statement typology and proceeded to apply it shamelessly to as many Pauline texts as I could possibly get my hands on, until I hit gold with Eph 5:21-33. The typology above is self-explanatory, but one thing should be noted: I am not oblivious to the fact that vv. 21 and 33 are not a perfect match in the chiastic sense, but then again, this is not a chiasm, simply a categorization of the significance of Paul’s statements, and I think both the first and last sentence were written as universal rules. What we see when we look at the typology is that the theological justifications (red) do not concern marriage so much as they concern Christ’s relationship to his ἐκκλησία. In particular, vv.26-27 stick out as two ugly sore thumbs when compared to Paul’s other statements about marriage (ex. 1 Cor 7), but fit snugly and neatly into the framework of Paul’s ecclesiology. Thus, my conclusion was that this passage is the summa summarum of chapter 5: because Christ and the ἐκκλησία are united in a marriage of sorts, each member of the congregation lives in such intimate proximity to that which is holy – the presence of God – that it is of the utmost importance for everyone to live as ἅγιος ( 5:3) – consecrated (with all the purity implications this word brings with it), in order to ensure that the presence (kavod) of God continues to dwell amongst them. Thus, in the larger statement-typological scheme of the chapter, vv.21-33 represents the theological (-ecclesiological) justification for the guidelines and rules presented in vv.1-20 (these rules are, of course, intermingled with theological justifications on a smaller scale).

Ergo, when we read vv.21-33 as part of the “family scheme” of Ch. 6 rather than as the theological justification for the rules and guidelines outlined in vv.1-20, we risk loosing the full rhetorical beauty of Paul’s argument. Without vv.21-33, the reader will not understand that the reason Paul sets such high moral standards for the congregation is because the ἐκκλησία, much like the Jerusalem Temple, is a place where God’s presence (in the form of Christ) mixes and mingles freely with the human. But in order for this holy blender to function, the congregation has to be pure (because, according to Jewish temple theology, relevant as always, the holy [set apart] and the impure cannot coexist). The metaphor of marriage to describe this relationship is a genius move for which Paul deserves much kudos: he uses contemporary ideals and constructs in order to explain a universal and normative concept. The metaphor also fits like a hand in a custom-sown glove with the classical Jewish way of describing the covenant between God and Israel – the very reason Israel needs to follow the Law (or should I say guidelines and rules) in the first place (see Hosea, Song of Songs’ traditional interpretation etc.). If we attempt to contextualize all this, I would posit that the focus in the Church today should perhaps be shifted away from the social construct and instead be centred on the universal concept Paul was in fact attempting to explain.

The point that I began making about three paragraphs ago is this: although this interpretation of the text may seem very academic and not very Christian (better word: confessional), the Bible study went unexpectedly well. Turns out that as long as you are serious about your interpretation and you don’t dismiss the Bible’s every detail as “contextual with no chance of universal”, you can have extremely rewarding conversations with people from all different kinds of denominations. Ergo, if we are serious about ecumenical and inter-religious dialogue, the answer is not to trivialize our differences, but rather to take them seriously and discuss them in an engaged, respectful, and reflected manner.

Disclaimer: I am aware that there is an ongoing discussion as to whether the historical Paul was in fact the author of Ephesians. My usage of his name in this entry should not be taken as proof that I side with those who believe in Pauline authorship. It is simply a result of my not knowing enough about the debate to make a reflected decision, and thus choosing to use the name that the text itself identifies as its author. Whether this “Paul” (Eph 1:1) is in fact the historical Paul or someone else writing in his name is a different question, one which I am not equipped to even take a guess at here. In addition, I also want to make it clear that I don’t mean to posit here that Eph. 5:21-33 is unconnected to the first section of Ch.6 – because it is – but I think the implications and meaning of the text changes dramatically depending on which emphasis you choose to read it with.